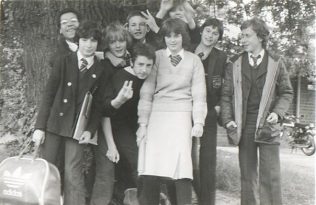 Reg Reynolds, who now runs the Cross Keys pub in Malvern, remembers going to the Malvern Winter Gardens as a teenager

I was a very unruly and uncontrollable menace, due to my dad committing suicide in the seventies. Being a teenager I was young and looking for an escape. I was taken by my mum and my punk rock cousin Julie Foley to every gig at the Malvern Winter Gardens, because they did the cloakroom. I remember all the staff; Bill Pritchard, Pete Robbo, Geoff Garbutt (first aid) with his team of lads who ran the security for all the gigs. It was utter chaos, some gigs were like a war zone after it had finished in town.

My first ever memory was being taken real early to help set up ready for The Ruts supporting The Damned. It was to have an everlasting effect on my life. My God, it was an amazing feeling to have found a way to vent my anger.

I loved this era. Every Cherry Red / No Future release was the dogs.

Thank you, Reg, for this memory