You are here: HomenextNew contributionsnextMemories of Joy Division, 5th April 1980 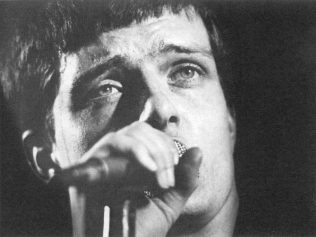 School friends, Dave Jones, Charlie Furniss and myself travelled from Stratford in Charlie’s white Hillman Imp. It was a glorious Spring day: the sun was shining and when we got to the gig (early to ensure getting tickets) its rays were still cascading through the line of windows that topped the side wall of the auditorium. This gig was listed everywhere as being “supported by Section 25”, but actually, there were two support bands. One was a local band “The Primal Screamers”. I remember thinking that they seemed a little out-of-place: not really looking or sounding like a band that should be supporting Joy Division. Sorry!

Section 25 were OK, though the pounding bass did seem to drown everything else out and the venue was very echoey, being only around half-full. I remember the bassist was thumping away at what looked like a home-made guitar, the body of which was pitted and had diagonal hand-painted ‘day-glo’ stripes across it.

When Joy Division took to the stage, the first number was ‘Disorder’ performed (as was most of the set) in deep blue and white light. When Ian Curtis went into his “dance” during “She’s Lost Control”, Bernard and Hooky glanced across at each other and broke into laughter. We didn’t understand this at the time and thought they were taking the piss, but in hindsight, it’s more likely that it was nervous relief after what had happened on stage (Ian’s fit) the previous night, which we only read about many years later. It was a good performance apart from a few bum notes and there was certainly no indication in Ian’s mood that he would attempt to take his own life the following day (Sunday April 6th).

During the cacophonous encore, performed along with members of the support band, we made our way to the right-hand side of the stage, to a door which we knew from experience lead to the dressing room (we’d been in there the previous year when Magazine and Simple Minds had played). There was no security and when we tapped the door, a short man with short-cropped hair poked his head out at us and after a second’s standing on ceremony said something like, “Err, oh, OK lads, give us a few minutes”.

The door closed again and we stood and waited. True to his word, after a couple of minutes the door opened again and the same chap said, “Yer alright, lads” and we walked through.

Joy Division, plus members of Section 25, were sat chatting quietly. Ian was sat on his own. There were a few other people in there too who I didn’t recognise (as I recall, there was a row of chairs lining every wall, facing out into the room). I can’t remember much of what was said, but I know I chatted mainly with Bernard and Ian. Steve Morris seemed in deep conversation with some bloke and Hooky, for reasons known only to himself, was being pretty unfriendly with everyone and we thought it best to give him a wide birth. Bernard commented on my copy of ‘Transmission’ which I’d handed to him to sign. Apparently it was the first copy he’d seen with a textured sleeve. Ian was sat quietly, hands clasped, elbows on his knees, looking very tired. He was wearing the same blue-grey shirt he’d worn for the performance. He was very sheepish and I approached him with caution, particularly after Hooky had growled at me and my friend, Dave. I probably said something unoriginal like, “Hello, Ian. Great gig. Would you mind signing these for me please?” I remember him smiling and in a soft, high-pitched voice saying “Sure. No problem”. I handed him the gig ticket (the front of which he studied in great detail before signing it; as if it was the first he had seen). I asked about the ‘new songs’ they’d played that night, though I can’t remember specifically what he said, other than he seemed enthusiastic about them and that they (the band) were getting ‘a bit fed-up’ playing some of the songs from the (first) album as they were over two years old.

Ian looked fatigued and seemed to have a painful-looking shaving rash under his chin (which I’d first spotted during their performance: the stage was quite high and we were stood around one or two rows in from the front between him and Bernard). I’ve since found out the rash was probably eczema: a side-effect of the medication he was on, unbeknownst to us at that time. I seem to remember my mate, Charlie, who was driving that night, being keen to get home and didn’t want to hang around any longer. When Ian handed back the things I’d asked him to sign, he smiled and said (again in a barely-audible, high-pitched voice) “Thank you”.

A little over a month later, he was dead.