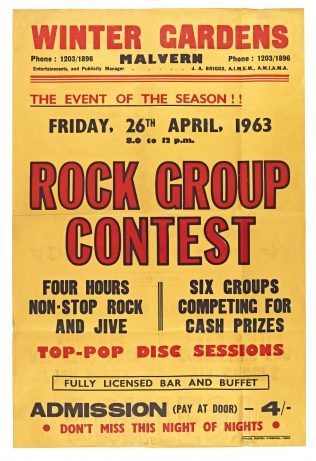 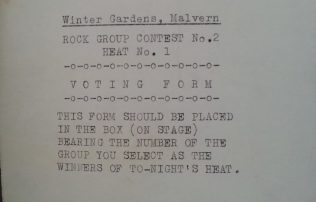 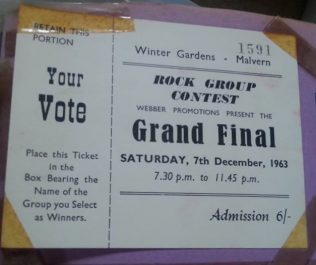 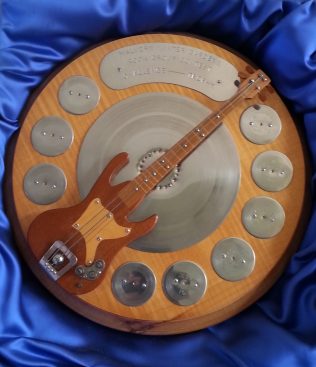 zoom
Trophy created by Doug Webber for the Rock Contests 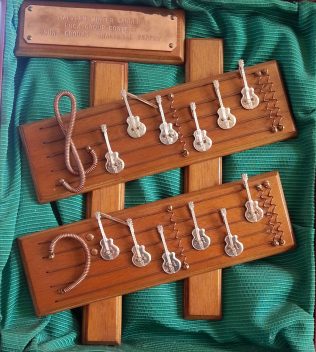 In 1963 local amateur music promoter Doug Webber decided to settle an argument between his daughters about which was the best band in Malvern; The Falcons or The Trojans. He hired the Winter Gardens, booked the bands and asked the audience to vote. The Falcons won the contest.

“We ended up having the first rock night in April 1963,” says Doug Webber’s daughter Cath Shinton, “So I was actually fourteen. It was an eight until midnight dance. It was something that had never been done in Malvern before, and it cost the audience the sum of four shillings to get in.”

The evening was a huge success, so Webber organised more. Bands came from all over the county. The first Grand Final featured The Cossacks from Worcester, the Cherokees from Eckington, and The Playboys from Bromsgrove who were the winners.

“What my father decided to do was to not use audience voting for the Grand Final. He felt that it would be too easy for the band managers to gather up votes, or to buy votes, to get their group through to the final and to win the trophy, so he decided that there would be invisible judges. Even I can’t tell you who all of them were, even now. On the night they filled in forms as to content of the songs, the performance, the presentation, this sort of thing. I learned later that the fans of two of the bands made so much noise, dancing around thoroughly enjoying themselves, that the judges couldn’t hear what was going on. So there was less noise while The Playboys were on, and they came out with the top marks in the end. It was a huge disappointment to many people, me included!”

Eventually new fire regulations brought the hall capacity down, and the cost of the hall hire went up. By 1965 the Rock Contests were forced to end.

Listen to extracts from our interviews with Cath Shinton and Alan Hoida, on the audio player at the top of the page, for more memories of the Rock Contests.