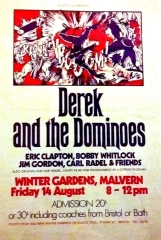 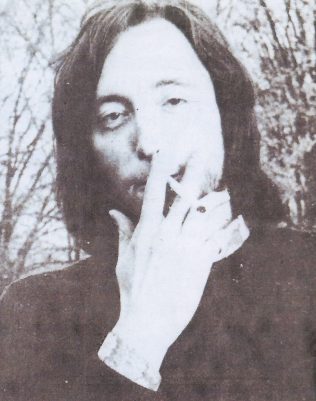 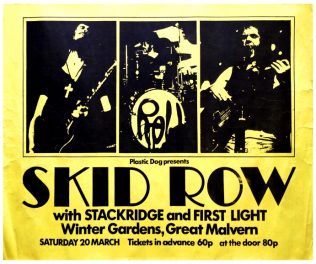 Plastic Dog was a music and graphic design agency based in Bristol, run by Al Read and Terry Brace. Plastic Dog had already made a name for itself at Bristol’s Granary Club.

“In 1970 we got a call from a London agency. They’d got a big name and they wanted us to put on a gig in this area for a specific tour. We tried to get Colston Hall in Bristol but it was booked. So we drove around looking for a venue and finished up at Malvern. I had a look at the hall and thought, ‘That will do’, so it was all agreed. The big name was Derek and the Dominoes, Eric Clapton’s new band.”

Admission to the gig was 20 shillings, and an extra 10 shillings for the return coach from Bristol. It was a huge success and on the strength of it Al and Terry booked another 18 gigs at Malvern between 1970 and 1972. Bands included Emerson Lake and Palmer, The Keef Hartley Band, Quintessence, The Groundhogs and Mott the Hoople.

An interview with Al Read can be heard here: Plastic Dog in Malvern and Bristol